Let us help you unleash your dog’s potential

Whether you have a new puppy or serious dog aggression issues, our certified dog trainer will determine your specific training goals.

At Pak Masters Dog Training of Bowling Green, Kentucky and Nashville Tennessee, we provide obedience and behavior modification training for you and your pet. We want you to be able to take your dog with you whenever you want without worrying about unwanted behavior. Our proven dog training methods not only empowers the pet owner to teach obedience but we also provide the tools necessary for your dog to be the best version of itself possible, a well balanced, happy and obedient dog for life!

At Pak Masters Dog Training of Bowling Green, Kentucky and Nashville Tennessee we teach you and your dog to communicate effectively no matter what the situation. We will train your dog to pay attention to you regardless of any distractions. Once you have that undivided attention the learning ability of your dog will amaze you! Let us show you our commitment to excellence and the incredible possibilities! You will not be disappointed.

My mission is to help every dog that comes my way and to continue adding to my knowledge and abilities by being a student for life.

The goal of my company is to have 100% percent satisfaction from my clients. I have and want to maintain a reputation as someone that gives more than what you pay for and I want to be known as someone that treats people with nothing but respect.

With Over 20 Years of Experience

What sets me apart from my competitors is my reputation and my internet presence. I am easy to find and I show plenty of work on youtube. I have a reputation as one of the top aggression and e collar trainers in the country. 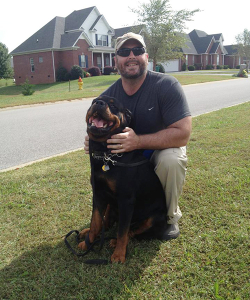 My name is Larry Krohn and I can fix your dog.

I have been a federal agent for over twenty year in which I make a good living. I train dogs because I love it, because it is my passion. I never try to sell anyone on anything. In fact I always insist that a prospective client calls around and interviews as many trainers in the area as possible. I encourage that you make a selection that best fits your needs and desired outcome.

Before I had the business, people would come to me for help all the time. People I did not know. They would just see how well behaved my dogs were and they wanted that. They had been to multiple trainers and never had any luck. I always solved their issues within 30 minutes. Finally my wife persuaded me to start Pak Masters and I did. I’ve successfully trained hundreds of dogs. I save very {aggressive} from euthanasia proving that any dog can be trained.

I provide an education for both dog and owner and I show how easy and how quickly harmony can be achieved in the household for families struggling with behavior problems from their dogs. I will show you how to enhance the relationship and teach a higher level obedience whether the dog has problems or if the owners just want a happy and reliable well behaved off leash dog. 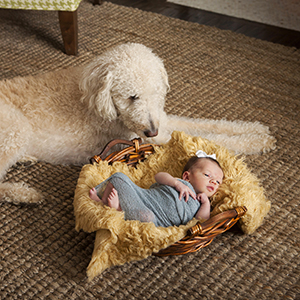 I found Pak Masters website and at the time there was a video that sold me. He had his dog, “Karma” off leash at the “Hill Center” in Nashville where my wife and I shop all the time. My wife and I both watched it and said we want to be able to do this with Wrigley.  I called Larry and spoke with him for a couple of minutes. I started asking him the questions, “can you fix this? And that?” and all he responded with was, “yes probably within fifteen minutes.” I was thinking there is no possible way!

Larry showed up to my house and we started working right away. Yes, Larry is going to teach your dog how to sit, stand, and heal and I think a lot of people can do that. How is Larry different? He teaches how and what your dog is thinking so “you” can train “your” dog, not Larry. I went from wanting my dog to “behave” to never having to put him on a leash or have to buy a house with a fence “for the dog.”

My wife and I truly appreciate what he did for us and I am pretty sure Wrigley enjoys all the freedom he gets. I’ve recommended Larry to hundreds of people! 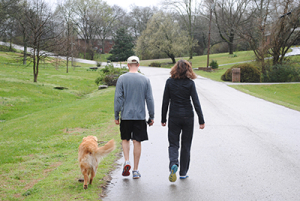 As a golden retriever puppy, Chaco looked like the picture on a postcard. He was a perfect little ball of fluff that made everyone smile, but then he started to grow. Having experienced puppyhood with a golden once before (albeit 15 years prior), we knew what to expect. But the last time we had a golden puppy we didn’t have kids and had more time to dedicate to training.

As with most golden puppies, Chaco was curious and energetic. As he grew though, my wife had a hard time controlling him…he was just too strong for her. Chaco tried to rule the roost and at about six months of age, he was successful quite often.

As the weeks went by Chaco became harder to control. While we all spent time with him and enjoyed this part of his puppyhood, there were times when it was really difficult. I remember a few times having to attach his lease to the leg of the kitchen table to keep him from getting into sometime or causing a problem.

Larry first met Chaco at three months old (Larry has a great video with Chaco on his website). At that age he was still manageable. Even at that young age, Larry told us that Chaco was very smart. We somewhat shrugged that off as Larry being kind. Larry worked with us using more traditional techniques, but as Chaco grew, I was the only one strong enough to effectively incorporate these techniques. But there were four other people in our family that had to deal with Chaco. It became difficult to even “play” with him. Sure we could throw a ball for him, but this became a game of keep away.

Back to Larry Chaco went at the age of one. Larry knew our family. He knew my wife and I liked to run through the neighborhood for exercise and wanted Chaco to be with us, but there were no sidewalks and lots of distractions. He told us Chaco would be able to run off-leash without a problem after some training. My wife looked at Larry like he had two heads. Chaco wouldn’t even return a ball…how could we trust him off-lease in a busy neighborhood?

Somehow Larry saw something in Chaco at the age of 3 months that we couldn’t see, but we trusted him. He introduced us to the E-collar and trained us how to properly us it. It was a real game changer. After some time with Larry (and some training for us), we started to see what Larry saw. We were able to better communicate with Chaco through the use of the E-collar, and he responded incredibly well. Playing ball with him became fun. Even our youngest, Michael, who was age 6 at the time could completely control Chaco.

Fast forward to today, Chaco is 4 1/2. He runs off-leash through our neighborhood. He sits at an open front door until he is told “okay” to go outside. He’s a great guard in a pick-up basketball game with the kids. He’s better at stealing the ball than most kids my son’s age. He also understands very well how to “leave it” when he does get the ball. He faithfully brings in the paper every morning and he does all of this with wagging tail.

Chaco is a great dog and certainly a big part of our family. Its’ really quite amazing how little we worry about him these days. Larry made all this happen! Sure, we had to put some time in, but, without the solid baseline Larry instilled in Chaco (and us), none of Chaco’s success would be possible. I never hesitate to give out Larry’s name. He does great work to not only train dogs but also help train families how to deal with dogs. If you are in the West Mead area and see a couple out with a golden retriever off-leash, stop by and say hey…It won’t take me long to mention Larry’s name. 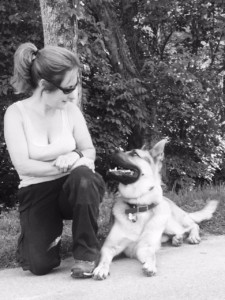 Two words come to mind when I hear the name, Larry Krohn, integrity and excellence. Larry is a no nonsense honest dog trainer that will guide you with calm direction. If you have the opportunity to work your dog with Larry Krohn you will not be disappointed. Be ready to work, follow Larry’s guidance and you will end up with an amazing relationship with your dog.

After receiving 4 refusals from various trainers to help me with my Irish Wolfhound with what I perceived was “fear based aggression”, Larry responded to my plea for help.  He promptly returned my call, heard my story and had scheduled and completed an evaluation within 1 week.

He provided and demonstrated thorough and clear instruction on ecollar training.

He clarified my misconceptions, showed me how to identify and quickly correct unwanted behavior and how to build the structure that was needed for a calm and peaceful co-existance in our pack. (The reality of my situation was that most of his corrections were geared towards ME and being an effective leader.)

Larry is one of the most proficient, knowledgeable and competent trainers I have worked with.   His selfless  communication and willingness to provide support can and will go years beyond your initial training because he is INVESTED in your continued success.

I have recommended him to many people who were struggling with behavioral issues and will continue to do so!  We thank you for all that you did to help us Larry!